Let’s learn how to serialize and deserialize python objects using the built-in pickle library. We’ll also use the csv library to store our serialized output in a CSV (comma separated values) file.

Serialization refers to the process of translating data structures or object state into a format that can be stored and resurrected later.

There are several applications of object serialization:

Back at Tripvillas, prior to running a data migration script, I had the idea of pickling the objects as a form of backup/persistence. This way, if any problems arose from the changes made by the script, we can easily restore the original state of the objects.

The pickle module implements a fundamental, but powerful algorithm for serializing and de-serializing a Python object structure. “Pickling” is the process whereby a Python object hierarchy is converted into a byte stream, and “unpickling” is the inverse operation, whereby a byte stream is converted back into an object hierarchy. 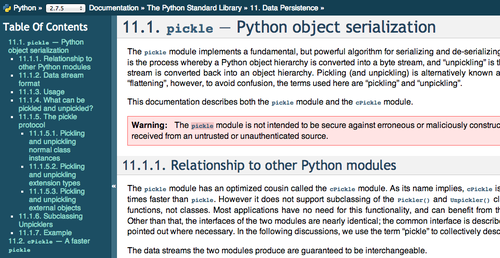 We are going to first serialize a number of python objects in our test database, and recover those objects by later deserializing our output.

We are going to serialize Python lists, but bear in mind that this works for lists, dictionaries, functions, classes, and more complex Python objects.

With a CSV file open (with append permissions), we use the csv writer object to start writing rows of serialized Python objects into our file. Do note that the csv writer and reader objects takes in other optional parameters to output other CSV formats, for example:

You can read up about these optional parameters for more detail on the Python docs.

Now that we have our csv file of serialized Python dictionaries, we can recover them by deserializing, using csv reader objects and pickle:

Here, we are iterating through each row in our CSV file, and deserialize the strings back into their original Python object form.

And we now have recovered the original Python dictionaries x, y, and z in our objects array! Alternatively, instead of using loads() and dumps() which output serialized strings, you can use load() and dump() to write them directly to your files. Do read the library documentation for their respective API definitions.

Finally, It’s also worth taking note that the pickle library has a more optimized cousin called cPickle, which have similar API interface definitions. You can trivially use cPickle by importing as such:

You should use cPickle in production rather than pickle, simply because of how much faster it is in comparison (reputedly up to 1000x faster).