Above is a recorded talk I gave on ‘Beyond JSON: Fantastic Serialization Formats and Where to Find Them’ for API Craft. Slides are available here.

This blog post is an aspirational transcript for the talk. Keep reading for more! 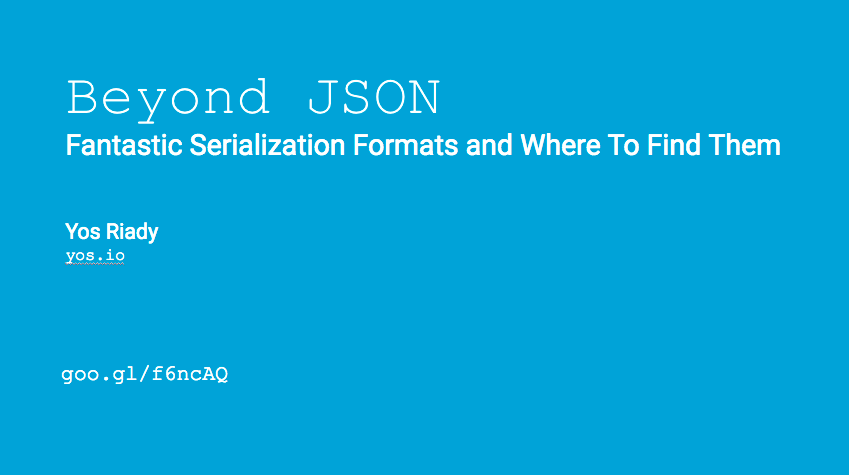 A Web API lets software communicate with each other over the network. 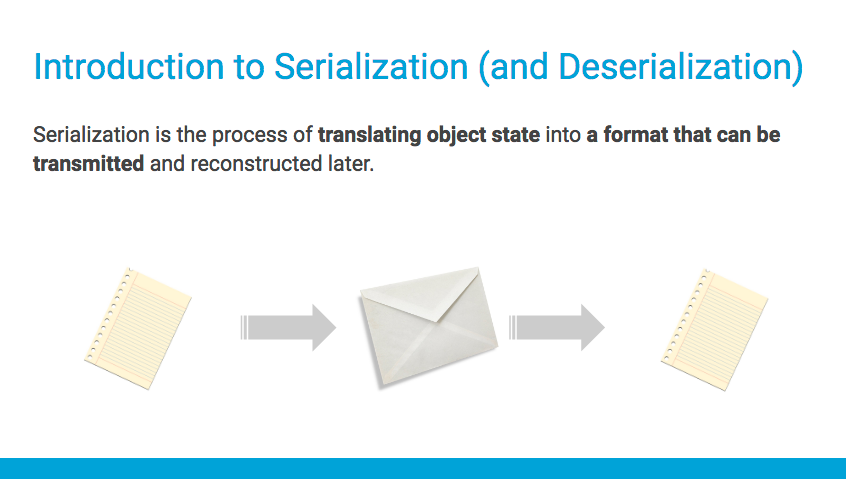 Serialization is a key step in this communication process. What language or dialect to these software systems communicate in?

Serialization is the process of translating object state into a format that can be transmitted and reconstructed later. 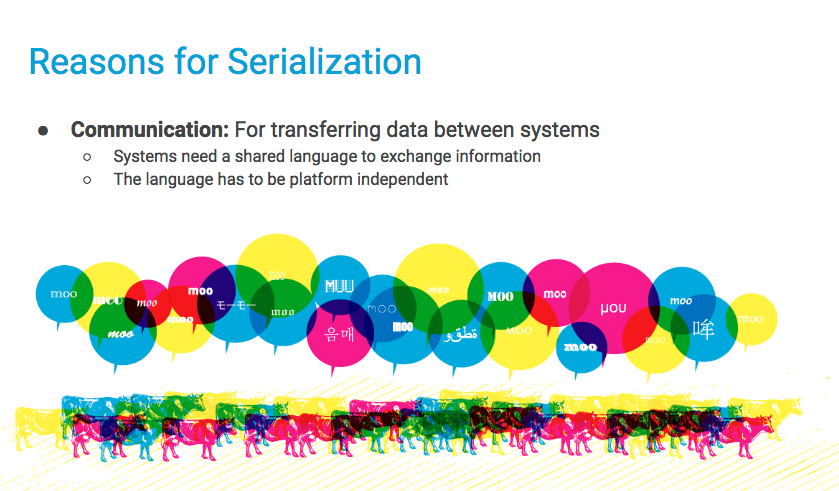 There are several applications of object serialization:

If you have two machines that are running the same code, and they need to communicate, an easy way is for one machine to build an object with information that it would like to transmit, and then serialize that object to the other machine. It’s not the best method for communication, but it gets the job done.

If you want to store the state of a particular operation in a database, it can be easily serialized to a byte array, and stored in the database for later retrieval.

In the context of APIs, we focus more on the Communication use case.

Say that we have a handful of software systems, each written in a different language and / or platform: 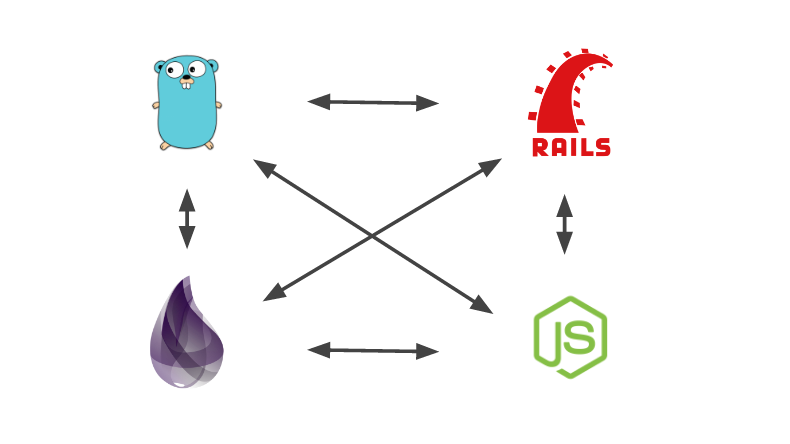 Each system has its own native types and data structures, and different ways of encoding them. When any two systems need to communicate with each other, we’ll need some kind of intermediary ‘translator’ between them.

However, using the approach above means we’ll need a translator for each pair of software systems. That’s too much work!

Instead, we can opt for a smarter approach: 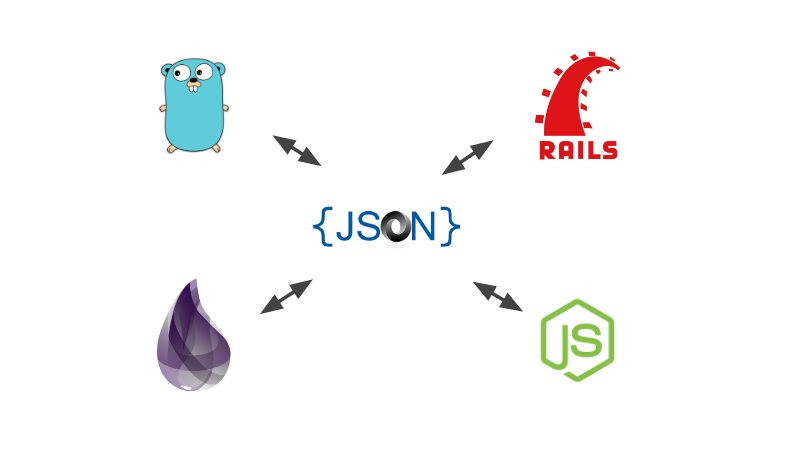 By having systems agree on a common serialization protocol, we can bypass the need for translation entirely.

Along the way we will examine the following key attributes:

JSON is widespread and human readable (which is why we use it as a YAML alternative.) Browsers can consume the data directly without a separate unpacking step. 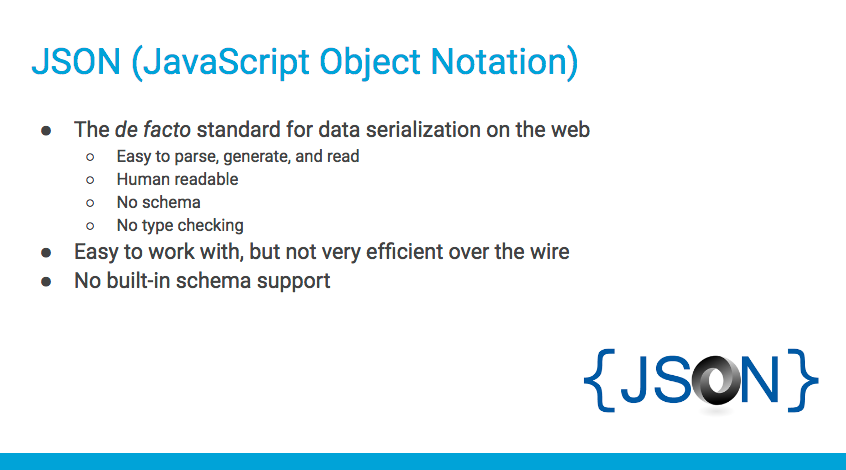 When serializing data from statically typed languages, however, JSON not only has the obvious drawback of runtime inefficiency, but also forces you to write more code to access data (counterintuitively) due to its dynamic-typing serialization system. 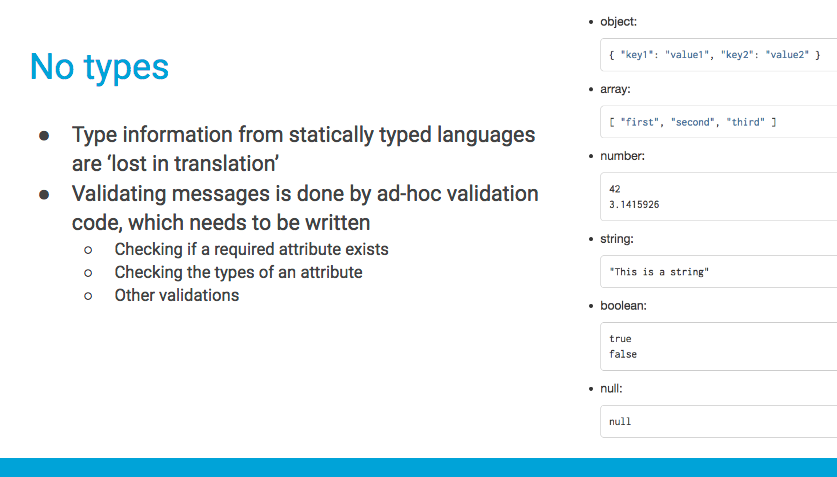 In this context, it is only a better choice for systems that have very little to no information ahead of time about what data needs to be stored.

There are no built-in type system for JSON, but you can use JSON Schema to add schemas and type validation.

MessagePack is like JSON, but with an efficient binary encoding. 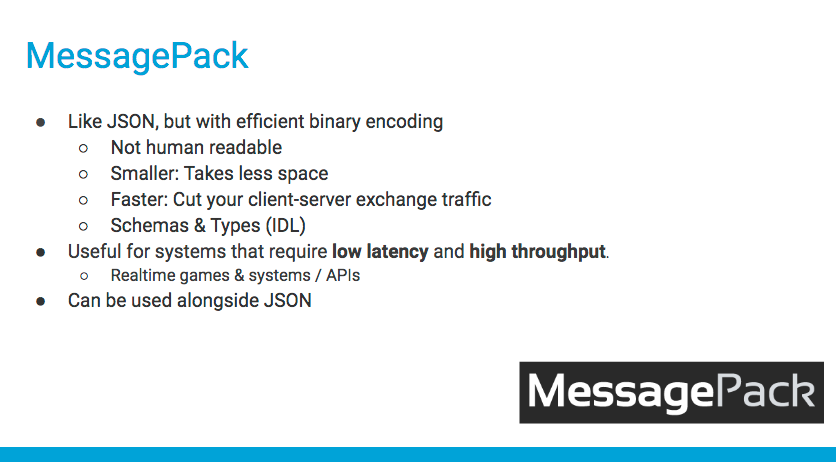 Compared to JSON, in MessagePack there are additional packing and unpacking steps:

Unlike JSON and YAML, MessagePack is not meant to be human readable! It is a binary format, which means that it represents its information as arbitrary bytes, not necessarily bytes that represent the alphabet. The benefit of doing so is that its serializations often take up significantly less space than their YAML and JSON counterparts. 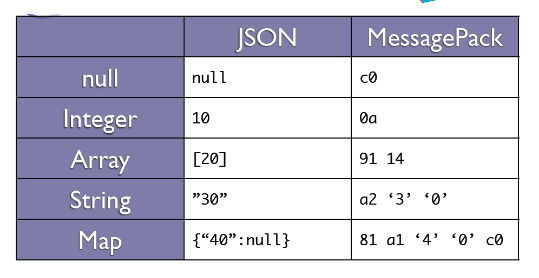 Although this does rule out MessagePack as a configuration file format, it makes it very attractive to those building fast, distributed systems.

Just for the record, MessagePack was not made for consumer-facing API’s.

Where browsers and JavaScript are not consuming the data directly – particularly in the case of internal services – structured formats, such as Google’s Protocol Buffers, are a better choice than JSON for encoding data. 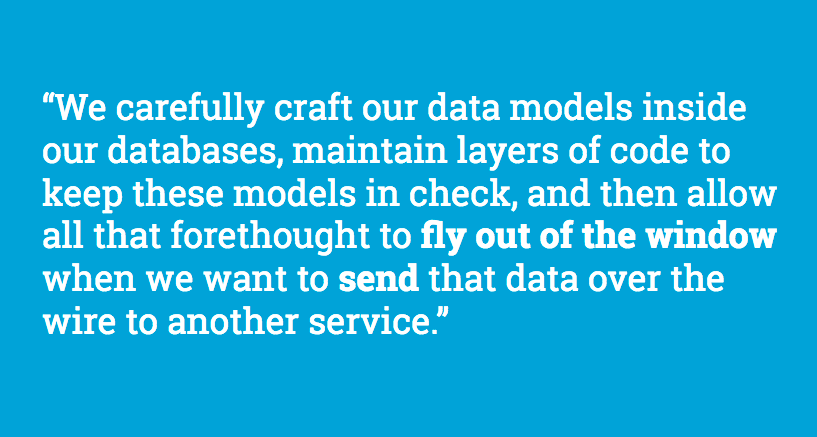 We should be able to capture information about our data models in our messages as well! 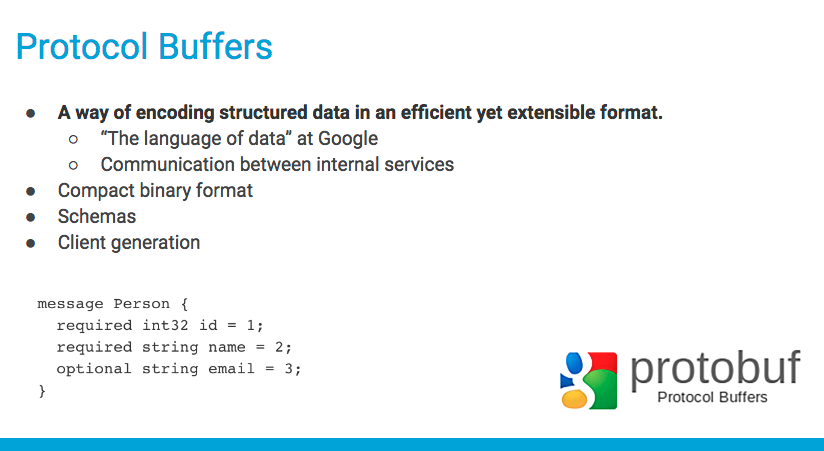 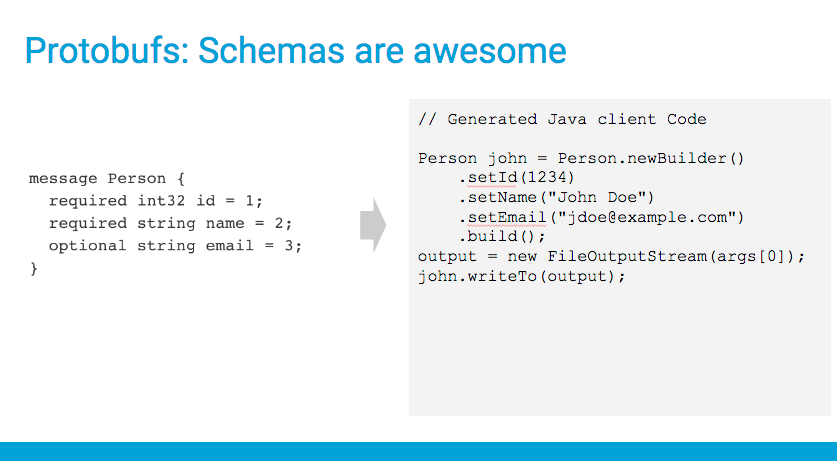 You define how you want your data to be structured once, then you can use the CLI to generate source code for write and read your structured data to and from a variety of data streams and using a variety of languages. 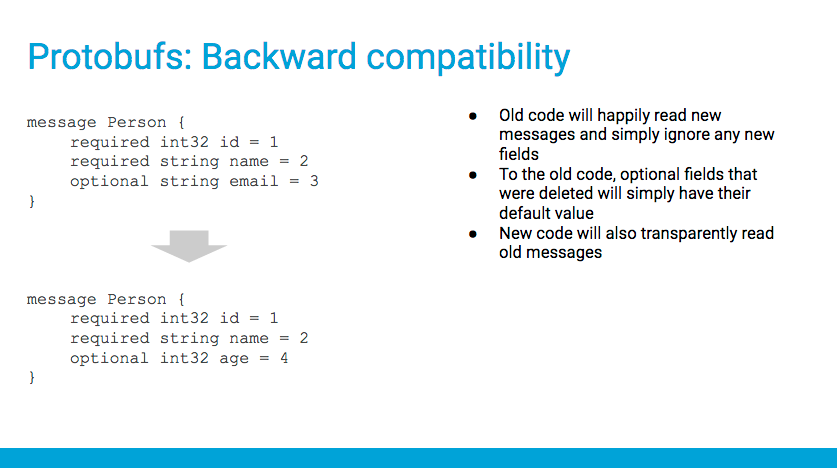 In Protocol Buffers you have to explicitly tag every field with a number, and those numbers are stored along with the fields’ values in the binary representation.

Thus, as long as you never change the meaning of a number in a subsequent schema version, you can still decode a record encoded in a different schema version. If the decoder sees a tag number that it doesn’t recognize, it can simply skip it.

New fields could be easily introduced, and intermediate servers that didn’t need to inspect the data could simply parse it and pass through the data without needing to know about all the fields.

However, there a few gotchas with schema evolution: 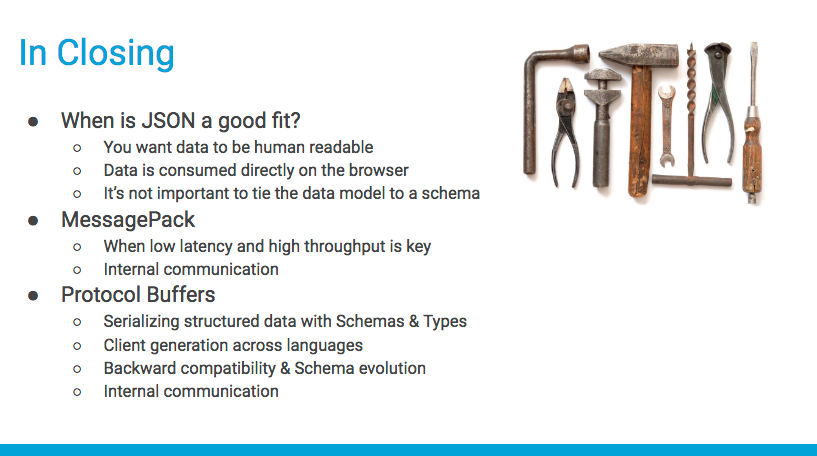 A Message From the Author 👋