Ethereum ERC Standards You Should Know About 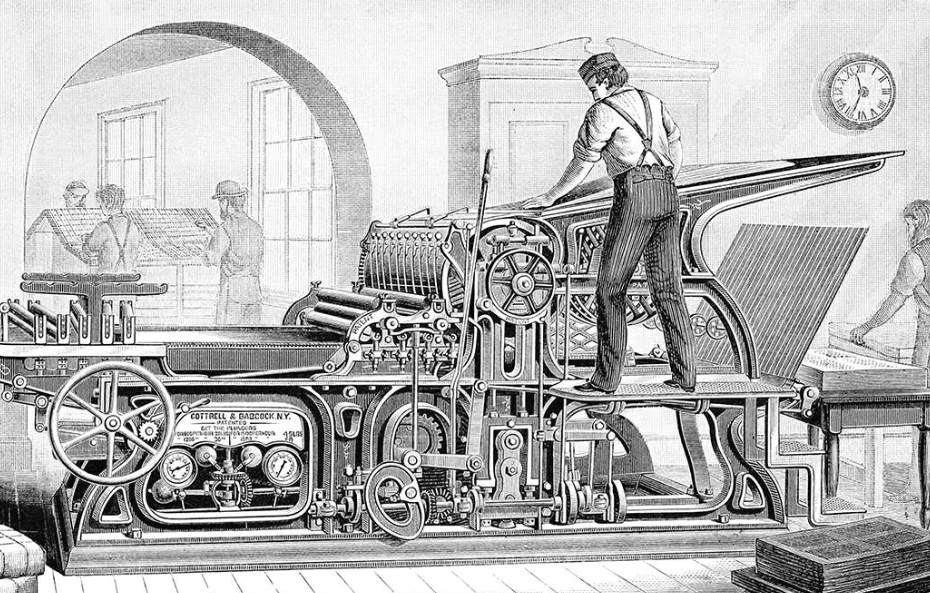 The ERC20 token standard has achieved near-complete industry adoption. It defined six minimal requirements for the way tokens behave on the Ethereum blockchain. Anyone could comply with the token standard and implement additional functions as needed. This standard ignited the ICO wave, allowing for the creation of core infrastructure and exchanges that is the backbone of the crypto ecosystem today.

Let’s look at Ethereum ERC standards you should know about - including some you’ve never seen before!

An ERC (Ethereum Request for Comment) decribes application-level blueprints and conventions in the Ethereum ecosystem. This includes smart contract standards such as token standards (ERC20) and are usually accompanied by a reference implementation. The ERC authors are responsible for building consensus within the Ethereum community for it to be accepted. Once peer reviewed and vetted by the developer community, the proposal becomes a standard.

The ERC20 token standard is a set of functions that an Ethereum-based token has to implement. The majority of tokens on exchanges are ERC20 tokens. ERC20 tokens implement the following interface:

ERC20 remains the most widely adopted standard in the Ethereum ecosystem.

Solidity smart contracts can listen to and react to Ether transfers using the payable fallback function like so:

However, you can’t do the same for ERC20 tokens. A major limitation of the ERC20 token standard is the lack of a way to ‘react’ to ERC20 transfer events. This results in ERC20 tokens forever trapped in contracts when users accidentally sent tokens to the wrong address.

ERC223 is a superset of the ERC20 token standard. It allows the use of tokens as first class value transfer assets in smart contract development by extending the token transfer function to check the destination address explicitly accepts tokens:

ERC223 disallows token transfers to contracts that don’t support token receiving and handling. It requires contracts to implement the ERC223Receiver interface in order to receive tokens. If a user tries to send ERC223 tokens to a non-receiver contract the function will throw in the same way that it would if you sent Ether to a contract without the called function being payable.

In the above snippet, functions have a tokenPayable modifier and inside the functions you have access to the tkn struct that tries to mimic the msg struct used for ether calls. ERC20 tokens are fungible, meaning that a balance of tokens in one account and tokens in another are interchangeable. Every ERC20 token is the same as every other ERC20 token.

Cryptokitties is the most well-known example of an ERC721 token. CryptoKitties are unique collectible digital artworks of cats. You can own and breed the cats to create new CryptoKitties.

The ERC721 token standard defines a minimum interface a smart contract must implement to allow cryptocollectibles to be managed, owned, and traded. An ERC721 token implements the following interface:

Users buy, sell, and discover cryptocollectibles on marketplaces that build on the ERC721 standard.

ERC777 is a new token standard that aims to address the limitations of ERC20, while remaining backwards compatible. It defines advanced features to interact with tokens. Namely, operators to send tokens on behalf of another address and send/receive hooks to offer token holders more control over their tokens.

It takes advantage of ERC1820 to find out whether and where to notify contracts and regular addresses when they receive tokens as well as to allow compatibility with already-deployed contracts.

Features that sets ERC777 apart include:

Tokens standards like ERC20 and ERC721 require a separate contract to be deployed for each token type or collection. This places a lot of redundant bytecode on the Ethereum blockchain and limits certain functionality by separating each token contract into its own permissioned address. With the rise of blockchain games that uses NFTs as in-game items, the explosion of contracts would introduce performance and cost problems.

ERC1155 is a standard for contracts that manage multiple token types. A single deployed contract may include any combination of fungible tokens, non-fungible tokens, or other configurations.

With ERC1155, you can transfer multiple token types at once, saving on transaction costs. Trading of multiple tokens can be built on top of this standard and it removes the need to approve individual token contracts separately. It’s also easy to describe and mix multiple fungible or non-fungible token types in a single contract. Security tokens are cryptographic tokens that represent fractional ownership in an entity, pay dividends, and share profits to its token holders. On the Ethereum blockchain, several competing standards such as ERC1400 and R-Token are in development.

This section highlights different approaches to define pseudo-introspection in Ethereum.

It’s sometimes useful to query whether a contract supports an interface in order to adapt the way in which the contract is to be interacted with. ERC165 standardizes the concept and identification of contract interfaces.

A contract that is compliant with ERC-165 implements the following interface:

Therefore the implementing contract will have a supportsInterface function that returns:

Similar to ERC165, in ERC1820, ‘implementation’ contracts must implement the following interface:

Implementation addresses are then stored in a registry contract:

You can then query the registry to check if a given contract address implements an interface with implementsERC165Interface().

Attestations are the backbone of trust and reputation in a decentralized identity system. In the real world, we attest our identity with documents like an identity card or passport. These documents, issued by a trusted authority, assert facts about us such as our name, age, address, and more. Identity cards don’t exist on the blockchain. Instead, we need a way to link real-world information to cryptographic addresses.

Some of the projects working on this space include uPort, Origin, Bloom, and Civic.

The ERC725 standard allows for self-sovereign identity. An open, portable standard for identities enabless decentralized reputation, governance, and more without ceding ownership of identity to centralized organizations. Users will be able to take their identity across different dApps that support the standard.

The purpose of an identity proxy is to allow an entity to exist as a first-class citizen in Ethereum, with the ability to execute arbitrary contract calls. It further allows any information to be attached to that proxy.

ERC735 describes standard functions for adding, removing and holding of claims on identity proxies. These claims can be attested from third parties (trusted issuers) or self attested. Trusted third parties can make claims about a particular identity, such as their name and address. dApps and smart contracts can then query an ERC735 registry to check the claims about a claim holder.

ERC1056 describes a standard for creating and updating identities with a limited use of blockchain resources. It specifies a contract called EthereumDIDRegistry that is deployed once and can then be commonly used by everyone. The standard is DID compliant.

An ERC1056 identity can have an unlimited number of delegates (an address that is delegated for a specific time to perform some sort of function on behalf of an identity) and attributes (a piece of data associated with the identity) associated with it. Identity creation is as simple as creating a regular key pair ethereum account, which means that it’s fee (no gas costs) and all ethereum accounts are valid identities.

It is both dangerous and in some cases illegal (according to EU GDPR rules for example) to record Identity Claims containing Personal Identifying Information (PII) on an immutable public database such as the Ethereum blockchain. The key monetization channel for businesses on the legacy web are monthly subscriptions. ERC1337 offers a standard interface for recurring subscriptions on the blockchain, similar to existing SaaS business models.

Money streaming represents the idea of continuous payments over a finite period of time. Block numbers are used as a proxy of time to continuously update balances. With blockchains, payments need not be sent in discrete chunks as there is much less overhead in paying-as-you-go.

ERC1620 describes a standard whereby time is measured using block numbers and streams are mappings in a master contract:

Communicating with dApps currently requires paying ETH for gas, which limits dapp adoption to ether users. Therefore, contract owners may wish to pay gas on behalf of the user to reduce friction, or let their users pay for gas with fiat money or ERC20 token.

Meta transactions allow a third party to pay transaction costs on behalf of the user. Note that while users do not need to own Ether to broadcast such meta-transactions, someone else needs to spend Ether to allow the content of the transaction to be performed on the network.

Introducing wallets and transactions to end users is a challenge, and having to explain that token holders needs ETH to send tokens is adding some friction to the process. The goal of this EIP is to abstract the gas for the end user, by introducing a fee paid in ERC20 tokens. A third party can then bring the transaction on-chain, pay for the gas of that given transaction and get the fee from the user.

EIP865 describes one standard function a token contract can implement to allow a user to delegate transfer of tokens to a third party. The third party pays for the gas, and takes a fee in tokens. 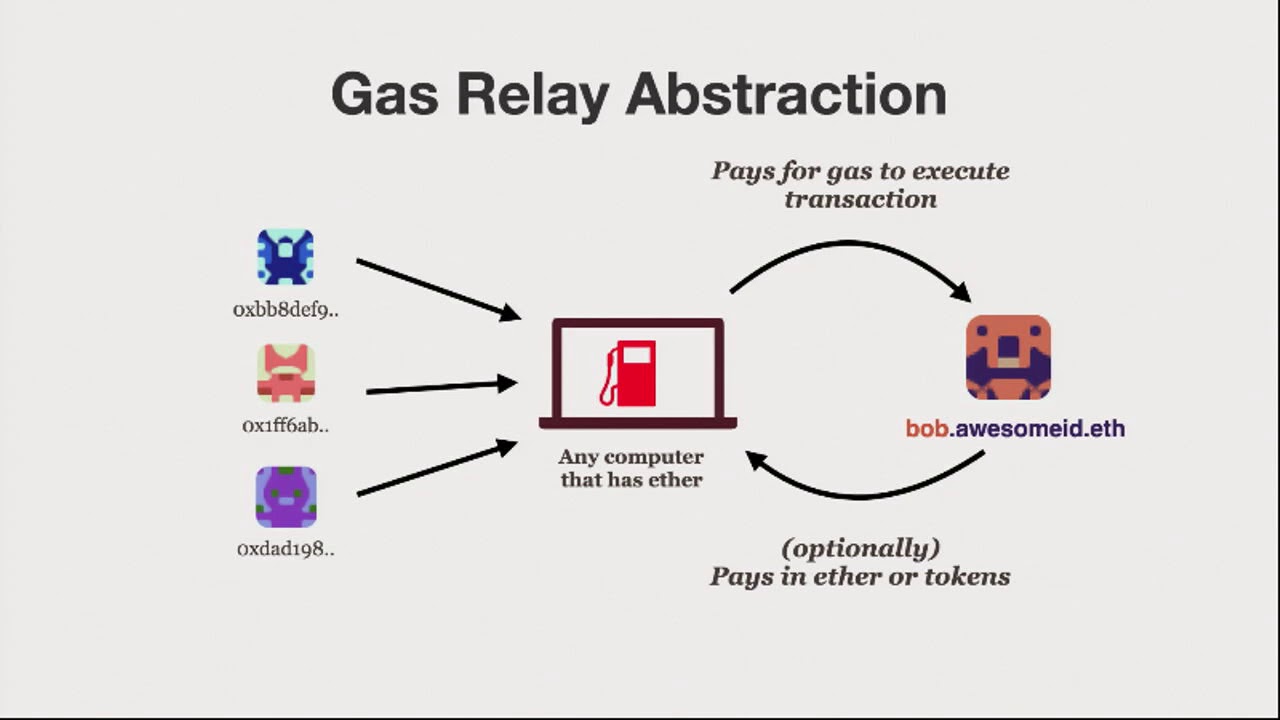 Allowing Etherless accounts to sign messages to show intent of execution, but allowing a third party relayer to execute them is an emerging pattern being used in many projects. ERC1077 standardizes a common message format as well as a way in which the user allows the transaction to be paid in ERC20 tokens.

ERC1078 extends this idea further and presents a method to replace the usual signup/login design pattern with a minimal scheme that doesn’t require passwords, backing up private keys, nor typing seed phrases.

The ERC1613 gas stations network is an EIP-1077 compliant effort to removing the user hassle of acquiring ETH. It does this by creating an incentive for nodes to run gas stations, where gasless transactions can be “fueled up”. The network consists of a single public contract trusted by all participating dapp contracts, and a decentralized network of relay nodes (gas stations) incentivized to listen on non-Ether interfaces such as web or whisper, pay for transactions, and get compensated by that contract.

Standards ERC20 have helped drive innovation in crypto. In this article we’ve examined a wide variety of ERC standards in the Ethereum ecosystem, from token standards to meta transactions.

I hope this exercise gives you a good overview of community efforts in the space. Be sure to keep an eye out for new EIPs.