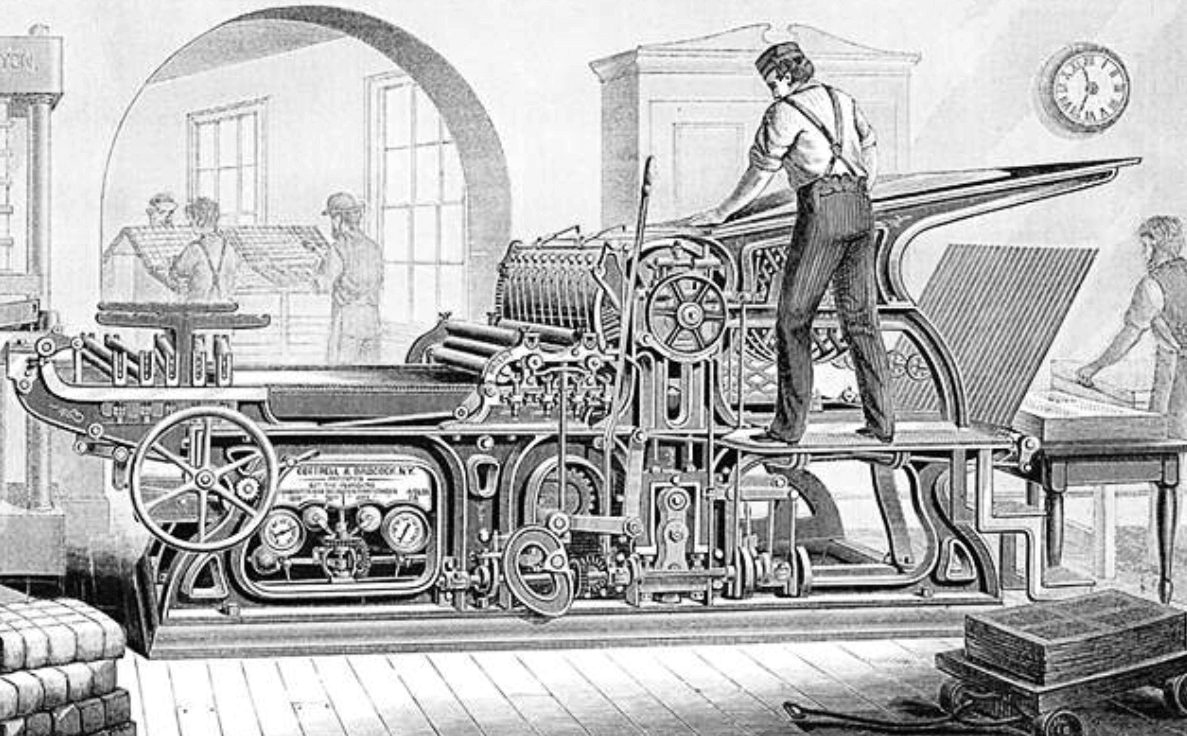 Unit testing is a critical part of smart contract development. The high stakes and rigid immutability of smart contracts demands even more emphasis on testing compared to traditional software. Unit tests ensures your contracts are performing correctly at the most fundamental level, acting as a vanguard in your defense against bugs.

In this article, we’ll learn:

Why Unit Testing is Important for Smart Contracts

On a blockchain, a single mistake could cost you all of your funds - or worse, your users’ funds. The cost of failure are in the high tens or hundreds of millions of dollars! 💰🔥

Smart contract bugs can lead to extreme financial losses. The DAO Hack lost more than 11.5 million Ether (US$70M at the time of the hack, now over $2B) and the 2nd Parity Hack lost US$200M of user funds. Today, with a TVL of over $2B, the DeFi space has a lot to lose should things go wrong. Bugs and hacks continue to affect major DeFi protocols today.

The goal of unit testing is to isolate each part of the program and show that the individual parts are correct. A unit test provides a strict, written contract that the piece of code must satisfy. They help you identify edge cases and unexpected behaviour throughout the development cycle.

Software has an inherent need for evolvability in response to changing requirements, and smart contract systems are no different. Code will need to be changed if errors are discovered or if improvements need to be made. It is no good to discover a bug, but have no way to deal with it.

Upgradeability mechanisms such as proxies do exist, but not all smart contract systems use them. Reasons for this include:

In either case, initiating contract upgrades is not a trivial matter. Large-scale upgrades require community consensus and are therefore avoided unless absolutely necessary.

Catching potential bugs before launch reduces the need for an upgrade path. Unit tests ensures your code is performing correctly at the most fundamental level, acting as a critical first line of defense.

In short, the importance of good unit testing practices for smart contracts cannot be overstated. The high stakes when smart contracts go wrong and their limited upgradability forces us to take a more rigorous approach compared to traditional software.

Unit testing plays a critical role in the smart contract development process. Unit tests are simple to write and quick to run, and let you add features and fix bugs in your contracts with confidence. No moving fast and breaking things here!

I’ve published a testing-solidity Truffle project that contains the contracts, tests, and utilities we’ll use in the rest of this article.

The Github repo is available here. It’s open source and publicly available for your learning. Star the repo if you found it helpful! 💫

For the rest of this article, we’ll write tests for this Counter smart contract:

When you write unit tests for a Solidity smart contract, you test with its contract abstractions in Javascript. You don’t actually write tests in Solidity.

Truffle uses Mocha and Chai to provide you with a solid framework from which to write your contract tests in Javascript (or Typescript.) Here’s an example test suite:

Mocha provides the hooks before(), beforeEach(), after(), and afterEach(). These should be used to set up preconditions and clean up after your tests. For us, we use beforeEach to deploy the Counter contract we want to test. Note that test contracts are only deployed to a local chain and cleaned at the end of execution.

Tests can appear before, after, or interspersed with your hooks. Hooks will run in the order they are defined, as appropriate; all before() hooks run (once), then any beforeEach() hooks, tests, any afterEach() hooks, and finally after() hooks (once).

Truffle comes preconfigured with the Chai assertion library, which comes in two flavours:

Let’s look at what’s happening in our first test case.

In this test case:

Run truffle test, and you’ll get a summary of your unit tests.

Did you notice that we have static types in our test? We use Typescript and typechain to generate types for our contracts. 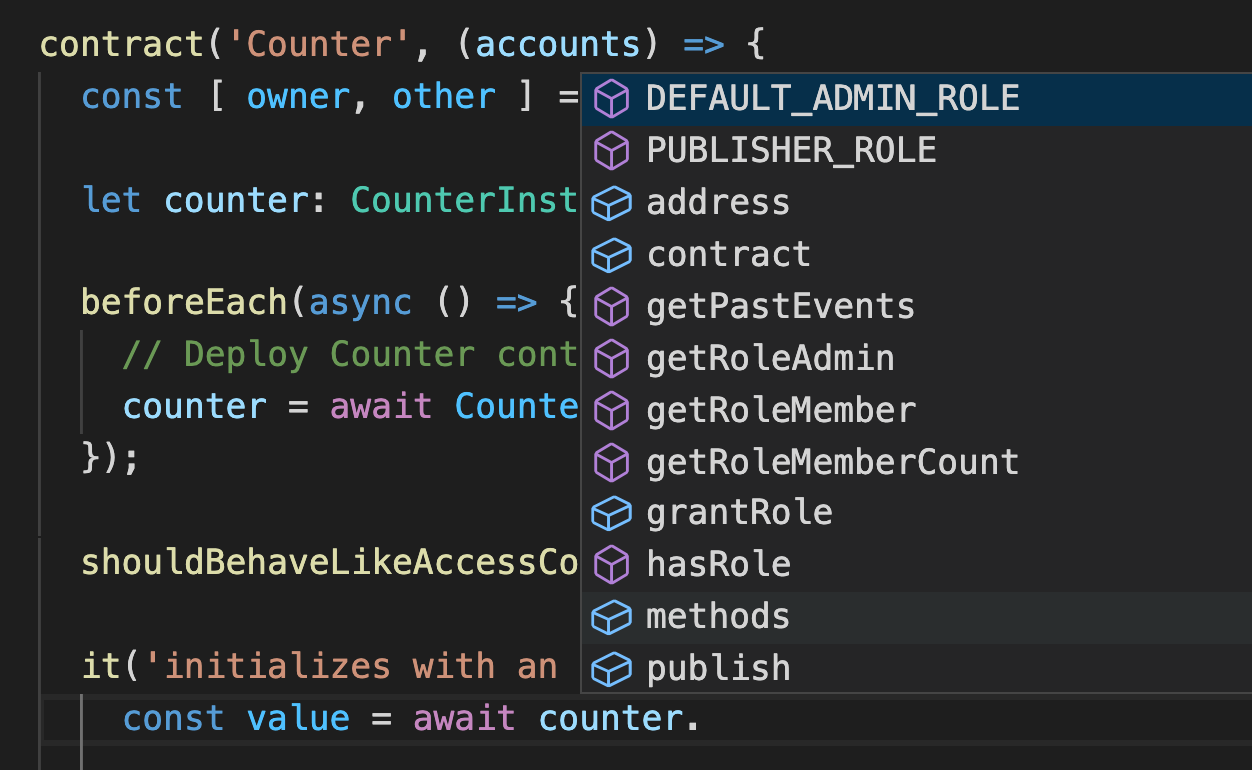 This works with any IDE supporting Typescript. You will never call a non-existent method again!

TypeChain is code generator - it takes in your contract ABIs and generates Typescript classes based on it. We run typechain every time we recompile our contracts:

Then, you can reference these types in your tests:

Our example Counter contract uses an AccessControl scheme where only whitelisted Publishers are allowed to call publish(). We want to write unit tests to make sure the following holds true:

To test contracts as different accounts, Truffle provides an accounts array which contains 10 addresses by default:

We can override any contract call with a { from } argument to send transactions as that address:

In the above test case, we call publish() from the other address who is not a publisher. We use expectRevert from the @openzeppelin/test-helpers library to assert that the transaction reverts.

In our next test case, we call publish from a publisher address:

We use expectEvent from the @openzeppelin/test-helpers library to check that the proper Published event is emitted.

Our example Counter contract inherits from an AccessControl contract. We want to assert that any inherited behaviour still behave as expected in Counter. After all, functions could be overriden anywhere in the inheritance tree.

We can use this in the Counter test suite as shouldBehaveLikeAccessControl:

Smart contracts can implement time-related logic such as cooldowns and rounds. Our Counter requires that an hour has passed between calls to publish():

Obviously, we’re not going to stick around or sleep for an hour in our tests! We can time travel with our test helpers:

The time module from the @openzeppelin/test-helpers library lets you move forward in time or to specific blocks.

You can use solidity-coverage to calculate the test coverage of your unit tests. This plugin is included in our sample project. Run yarn coverage to generate a report:

Code coverage tools help you spot any untested code. Make sure that all branches are covered!

Gas reports can be helpful for optimizing gas usage. They help you identify the gas-guzzlers amongst your smart contracts.

This plugin is also included for you in the testing-solidity sample project. Simply clone and run it! 😀

That’s it! We’ve learned how to unit test smart contracts:

Unit tests are an important vanguard in your line of defence against bugs. However, unit testing should not be the only tool in your repertoire! Consider a layered security approach. 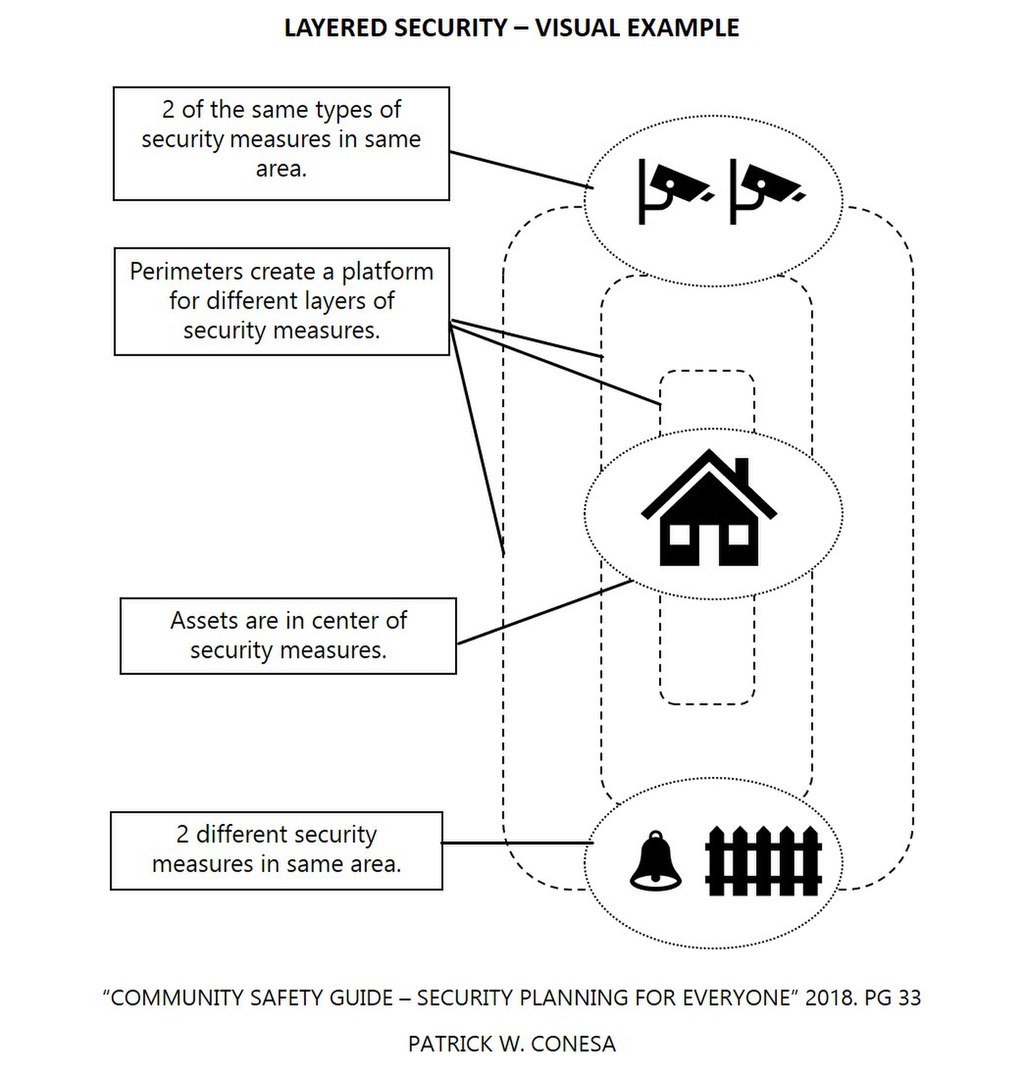 Other techniques you can use to help secure smart contracts include static analysis, continuous integration, security audits, and formal verification. Every layer you add enhances the overall security of your system. The more layers, the better.

The high stakes and rigid immutability of smart contracts demands even more emphasis on testing compared to traditional software development. Unit tests help verify that your application behaves exactly as you intended. We covered:

What’s your smart contract testing setup like? Feel free to comment below with your questions and feedback. 🙂